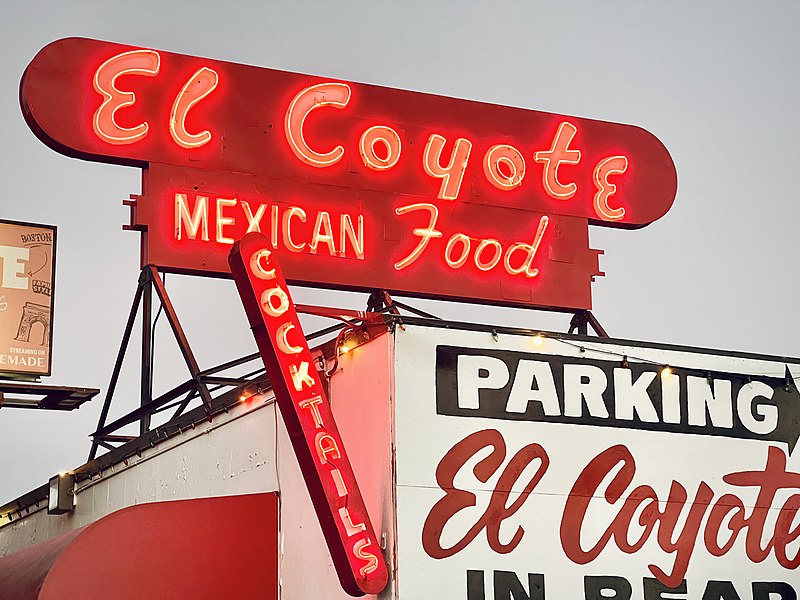 If there’s a restaurant in LA that needs absolutely no introduction, it’s El Coyote. But that didn’t stop our team from grabbing a camera and heading over to the Fairfax neighborhood to capture the iconic eatery in all its glory. Our latest Community Spotlight takes a look at one of the oldest and most beloved Los Angeles restaurants in Hollywood history. Don’t mind the lines; it’s worth it!

Finding Success Amidst the Depression

In 1931, America was still in the early days of one of the bleakest periods in its history. Yet, it was amidst this economic turmoil that Blanche and George March picked up stakes and made the trek to California from neighboring Arizona.

While America and the world as a whole suffered, Hollywood thrived in its golden age. The American public’s adoration of the silver screen exemplified that, even in times of turmoil, the average American prioritized entertainment. The Marches were banking on the average Angeleno also prioritizing hearty Mexican cuisine. Clearly, their bet paid off.

The Marches opened the doors of El Coyote in 1931 to instant success. But at the time, the Los Angeles restaurant had yet to move to its iconic Fairfax location. Instead, the Marches operated out of a tiny, unassuming space near the corner of First and La Brea.

Within two decades, the Marches recognized that the spatial restrictions of their restaurant were problematic. So, in 1951, El Coyote moved to its widely recognized Beverly Boulevard location.

The Iconic El Coyote Finds Itself

To say that the Beverly location in the Fairfax neighborhood was larger is a bit of an understatement. El Coyote could now accommodate up to 375 guests across its eight spacious rooms. Additionally, El Coyote really began to grow into its personality at this location.

Having become something of a hotspot for Hollywood royalty, the Los Angeles restaurant quickly amassed an impressive collection of autographed headshots. To this day, the autographed visages of Hollywood luminaries such as John Wayne and Loretta Young bedeck the vibrantly colored entry wall.

Glass bottle windows contribute to the LA restaurant’s insular coziness. Booths of dark red leather further carry this familiar sense of comfort. Soaring strings of colorful Christmas lights serve as a beacon welcoming Angelenos all year long. All of this soaks in a vintage quality that keeps regulars coming back and inspires pilgrimages from around the globe.

Of course, there’s a heck of an elephant in one of El Coyote’s eight rooms. Since 1969, El Coyote has been steeped in infamy over an American nightmare that had very little to do with the actual restaurant. Yet, it’s widely noted as the site of the final meal of Sharon Tate, Jay Sebring, Abigail Folger, and Wojciech Frykowski. Shortly after leaving El Coyote on the evening of August 8, 1969, the group were brutally murdered by acolytes of Charles Manson. It was the most widely publicized true crime event in American history to that date.

While America never forgot about those horrifying events, director Quentin Tarantino brought them to light (with a twist) in his stunning award-winning film Once Upon a Time in Hollywood. To capture the authenticity of both the time and the place, Tarantino filmed scenes in El Coyote. While the restaurant doesn’t sensationalize those tragic events, the booth where Tate and her party enjoyed their last meal is still in service.

What Distinguishes El Coyote from Your Average Los Angeles Restaurant

Though true crime aficionados regularly journey to El Coyote looking for a taste of notoriety, most of its patrons come seeking different flavors. They’re here for the mouth-watering enchiladas; for the tantalizing tacos and the belly-busting burritos. They’re here for those award-winning Margaritas.

And while authentic Mexican cuisine may have been at the heart of the Marches’ vision, it’s more than food that guarantees lines of the devoted every weekend. El Coyote is an experience. It’s Hollywood history while simultaneously providing a portrait of the city as we are today. It’s the golden glow of the searchlight beams solidified.

At any given moment, you’ll find seasoned regulars sitting at the bar beside first-time tourists. All are welcomed like family. And maybe that’s because this legendary Los Angeles restaurant is still family-owned after all these years.

El Coyote is where the stars fall to earth to mingle, to eat and drink, and to connect before returning to their posts in the heavens. The staff of roughly 95 serve upwards of 1,000 meals a day… and those numbers haven’t dropped in over 90 years. And in a city that kills trends as quickly as it sets them, that’s some true Hollywood magic.

Get a sample of what makes El Coyote so special in our latest Community Spotlight video!